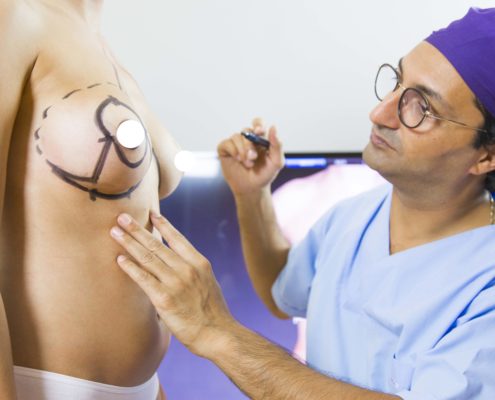 It means to hanger the breasts. There is no actual hanging. There is procedure applied to the skin of the mammary gland to shape it, but the breast looks like it’s taken up and hanged. This definition describes the procedure of reconstruction of the sagging breast tissue. It’s commonly called “Breast reconstruction” or “Breast lift”. The mammal structure can sag in time because of giving birth, breastfeeding, lactation and weight gain or weight loss. There’s loosening in the breast tissue and in the skin. The breasts have this condition by default sometimes. The breasts may sag because of these changes in their shapes or they may sag because they are too large and heavy. All of these structural deformities don’t affect the function of the breasts, the only concern here is aesthetical. All of these deformities can only be fixed by mastopexy. The breast lift surgery can also fix the size differences and symmetry problems of the breasts.

What is sagging (ptosis) of the breast?

They are basically divided into 2:

The surgery is performed at a hospital under general anesthesia, and takes 3-4 hours. It follows the sketches made the day before the surgery. The incisions are either only on or around the nipple or maybe even a vertical incision is made and a short T shaped incision is added under the inframammary tough. The goal is to take the nipple up, remove the excessive breast skin and make the breast tissue rounder, tighter and fresh.

After the Mastopexy Surgery

It’s usually comfortable after the surgery. A bra that pressures the breast is put on to the patient. Drains are placed into the breasts, usually both of them. They are removed in 24 hours. This is to avoid blood piling up in that area. Arm movements are limited for a couple of days. there’s no need to remove the melting sutures. There may be swelling in the early days. The patient can go back to work in 2-3 days. Heavy exercise is not recommended for 6 months. This surgery usually has good results, helps the patients psychological state. The satisfaction rate is really high. The pro-op period is a comfortable, mild one. The only complaint is dizziness for a couple of days. there’s no pain usually. Recovery period is short.